Some of the finest LED strip lighting alternatives are suitable for a variety of interior design tasks, such as recessed lighting, television backlighting, and kitchen undercabinet light strips.

We tested several of the light strips. Each one was chosen based on its quality, usefulness, and appealing design. In addition to analyzing how well the light strips operated, we looked at the adhesive strength, app functioning, brightness, and simplicity of installation. Continue reading to discover which lights stood out from the crowd and to learn about some of the top LED light companies.

How to Choose LED Light Strips

When looking for the finest LED strip lights, there are several factors to consider, ranging from color and size to intended usage and brightness. Consider the following aspects when selecting an LED light strip to guarantee your decision meets or surpasses your expectations for the intended use. 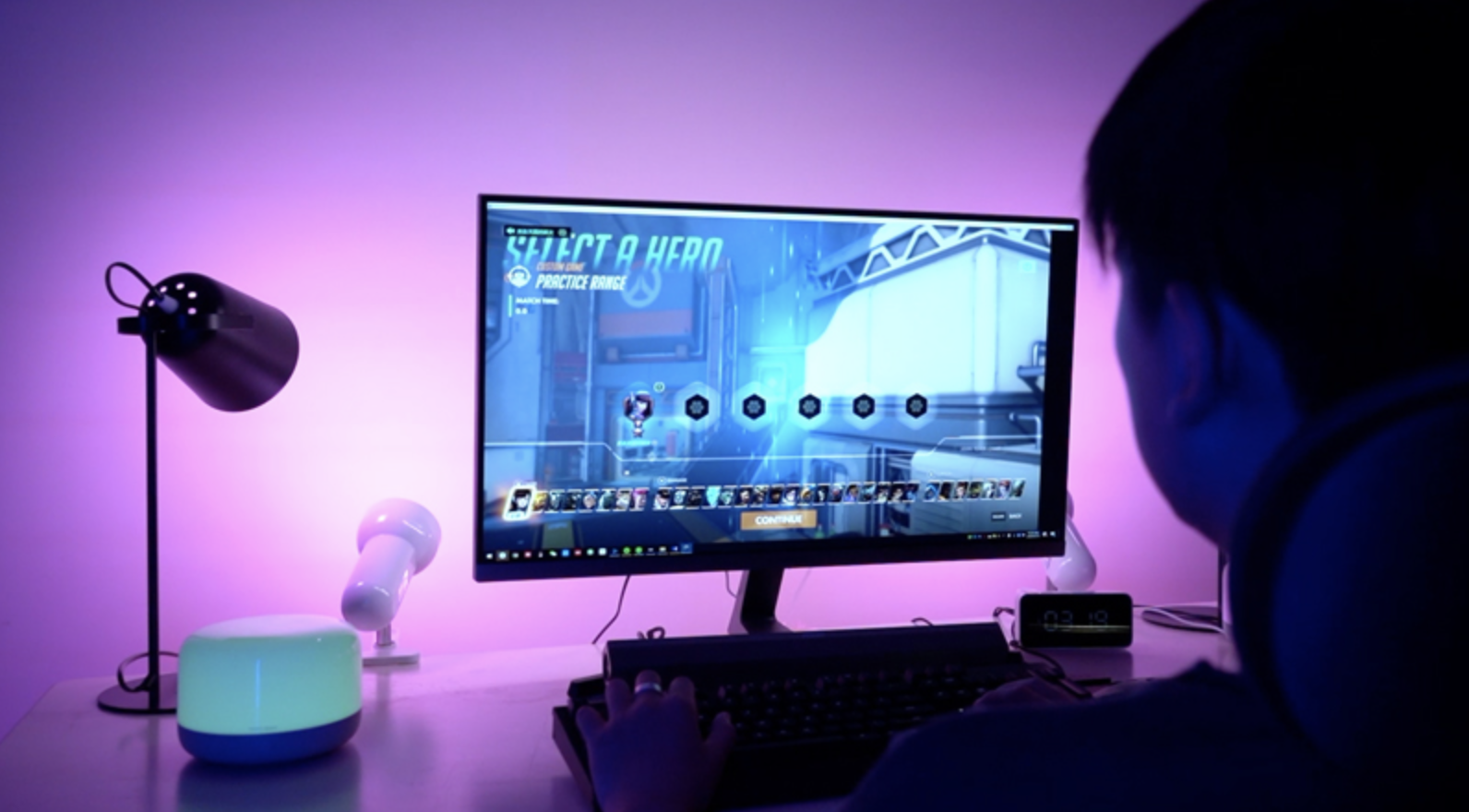 Before choosing a product, it is critical to identify where the LED light strip will be mounted. Some designs are tailored to particular applications, such as stair lighting or television backlighting. They vary from the usual LED light strip due to their expertise. A device designed to backlight a television, for example, may have four precut pieces and television-specific synchronizing choices that change color to imitate the colors on the screen.

Water resistance for patios, dimmer compatibility for bedrooms, and motion detection for a corridor, bathroom, or stairwell are all important site considerations. Even a more general installation of LED strip lights for ceilings or walls requires some thought before you buy so you don’t wind up with a speciality product that isn’t intended for where you plan to use it.

Light strips come in a range of lengths, ranging from 1 to 32 feet. Their length is generally proportional to their brightness and intended use. LED light strips designed for television backlighting or stairwell usage, for example, are often shorter in length to facilitate installation.

Most light strips include a flexible circuit board that allows them to bend around corners and run across curved surfaces. Some LED light strips are so bendable that they may be twisted up to 90 degrees without causing damage to the circuit board.

However, as an LED light strip’s power improves, so does its flexibility, with some light strips being fully inflexible in construction. These rigid goods are often substantially shorter, sometimes as little as one foot long, and much brighter than the usual light strip. They may also include motion-sensing technology, which makes them perfect for lighting stairs.

The brightness of an LED light strip is measured in lumens per meter (LM), which is determined by the density of LED lights inside one meter.

It is vital to remember the hue of a light strip. Some light strips are only available in one color, whilst others might have millions of color options. The color selection you choose is totally based on your own preferences.

Hue temperature is measured in degrees Kelvin (K), and it indicates how warm or cold the color of a light looks. Lower values imply warmer color temperatures. The pleasant glow of an incandescent light bulb has a warm temperature of 2,700K, but natural sunshine has a considerably colder temperature of 6,500K.

Wattage is a measurement of how much energy is required by the light strip to operate at its maximum brightness. If a light strip demands more energy than the power supply can provide, it will not function properly, frequently creating a significantly lower light. LED light strips may be powered by batteries, connected into wall outlets, or hardwired directly into the home’s electrical system.

LED light strips were formerly connected into the electrical system to function with a light switch or hooked into a power outlet and controlled with a button. LED light strips, on the other hand, have gone a long way since their inception.

There are light strips that link to Bluetooth, Wi-Fi, remotes, or mobile phone applications. These settings allow you to modify the brightness and color of the lights, program them to correspond with music, and create timetables for getting up, returning home from work, and going to sleep.

Smart LED light strips that link to smart-home ecosystems such as Amazon Alexa or Google Home may even be controlled by voice commands, but simpler choices with just one color may merely have a remote to switch the light on or off.

Whatever form of LED light strip you want, the common aim is to choose a high-quality product. To make your search simpler, we examined a range of LED light strips and selected the following selections as some of the best available based on the aforementioned purchasing parameters, price, efficacy, and reputation. One of them, organized by category, could be just what you’re looking for to brighten up your house. 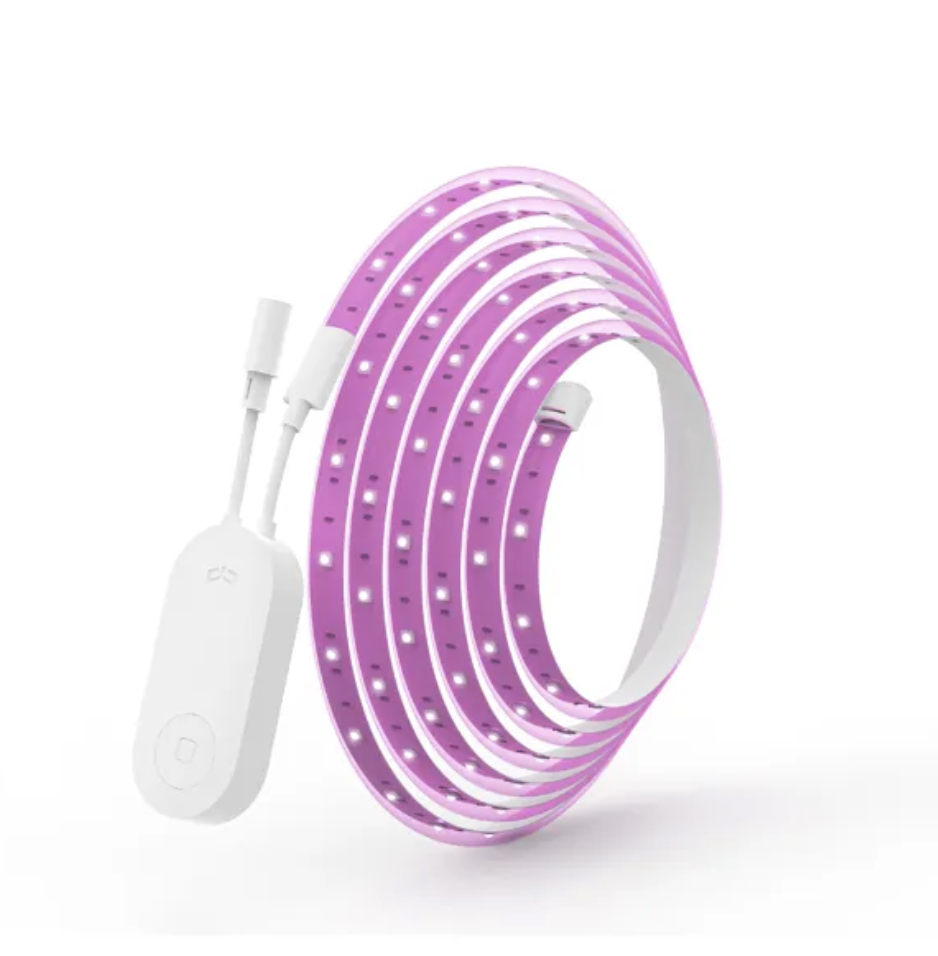 The LED Lightstrip 1S provides dynamic illumination based on the environment, with individual color selection (16 million colors) and adjustable brightness. Impressive accents may be created for special events using the pre-programmed settings, and even music synchronization and connection with Razer Chroma RGB are feasible. Because of the light group control function, it is possible to automate many light strips at the same time. The RGB light strips feature voice control and may be controlled with a smartphone using the Yeelight app.

Depending on the Situation, Convertible Lighting

The LED Lightstrip 1S allows you to create artistic effects in your living room, dining room, bedroom, kitchen, or patio. Light strips are a terrific way to decorate your house for holidays, parties, and other special events. Adjust the brightness and color of the light strips to suit your mood — there are 16 million hues to choose from.

With the Yeelight app, you can store unique lighting scenarios for each occasion, allowing you to create the ideal ambience with a single click. Alternatively, you may synchronize the RGB light strips with your favorite song to alter the colors to fit the pace and sound of the music. Furthermore, the Lightstrip 1S may be adjusted to fit any space in your house. Simply take a measurement of the surface on which the Lightstrip will be affixed. Cut it to the length you want and stick it on using the self-adhesive backing. You may extend each Lightstrip to 10 meters using Yeelight’s 1m extension strips (LED Lightstrip 1S Extension).

A Light That is in Sync with Your Digital Lifestyle 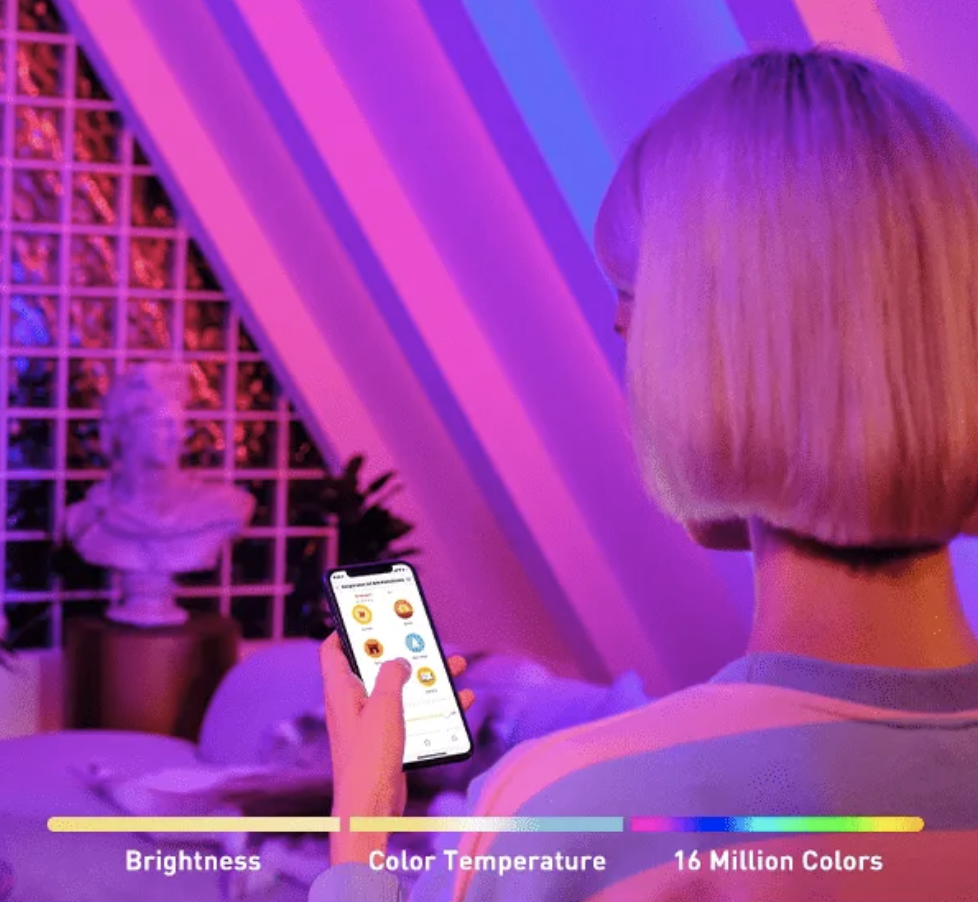 All prominent smarthome systems, such as Amazon Alexa, Google Assistant, and Apple HomeKit, are compatible with the LED Lightstrip 1S. It may also be controlled at any time and from any location using the Yeelight light strip app. Furthermore, by combining light strips into light groups, you may simply control several light strips in your house at the same time. Finally, you may store customised schedules and set a timer.

Nexillumi’s 50-foot Music Sync LED Light Strip has 540-LM LED lights and is ideal for accenting a room or entertainment center. Two 25-foot flexible light strips are supplied, as well as many straight and L-shaped connections, allowing the light strip to be cut and mounted wherever. 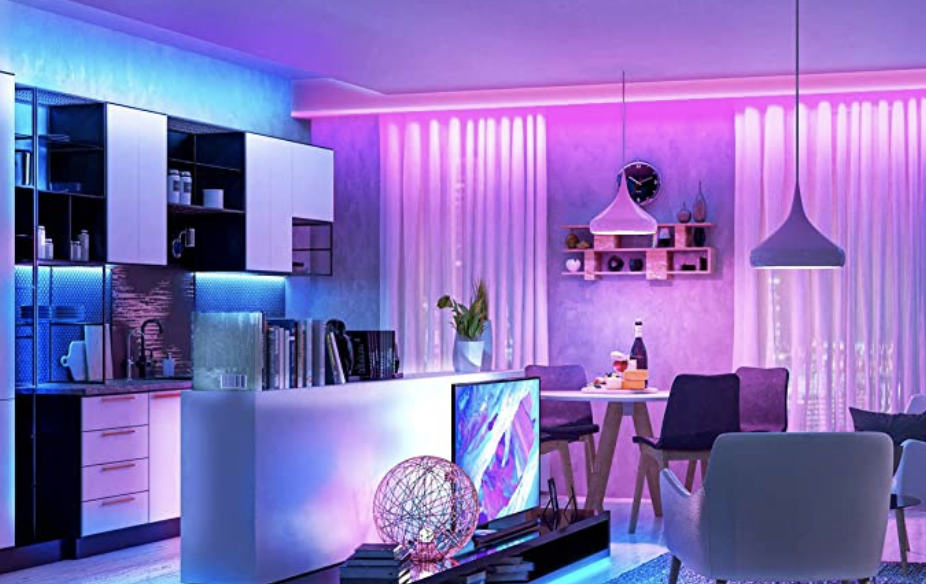 Because of the decreased brightness of these LEDs, just 27 watts of electricity are needed for the greatest light output. Download the Ehome Light app to customize the color choices, responsiveness to music rhythms, and brightness. For individuals who are uneasy with smartphone apps, a remote with the same functionality is offered.

We put these lights to the test in the kitchen. The Nexillumi strips aren’t coated, but this makes them lighter, which aids the adhesive in keeping the strips in place beneath the top cabinets. They don’t produce a lot of light, but it’s enough to give accent lighting and increased visibility. The app functioned nicely, but the remote was not up to par. We discovered that the remote had to be quite near to the device in order for it to operate, and that it occasionally didn’t work at all. 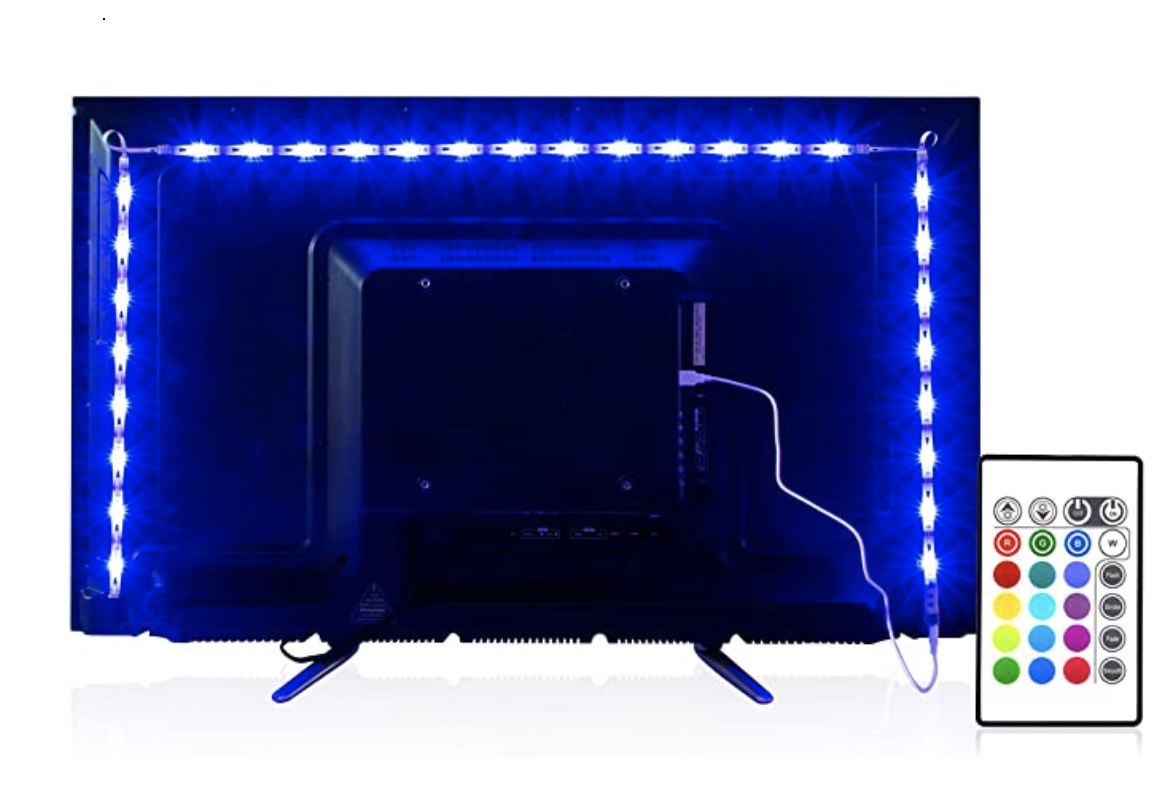 PANGTON VILLA Led Strip Light for TV backlighting comes in four strips with adhesive backing for easy installation. The 540-LM lighting is ideal for creating an ambiance behind a television whether playing a favorite game or cuddling up to watch a horror movie.

There is no need to be concerned about wattage restrictions since the light strip connects straight to a television through a USB connector. If your TV lacks a USB port, insert an adaptor into the power socket. With the accompanying remote control, you may choose from 16 various colors or dim the lights. However, bear in mind that this light strip kit is solely intended for TVs or computer displays and is unlikely to be a good choice for other applications. 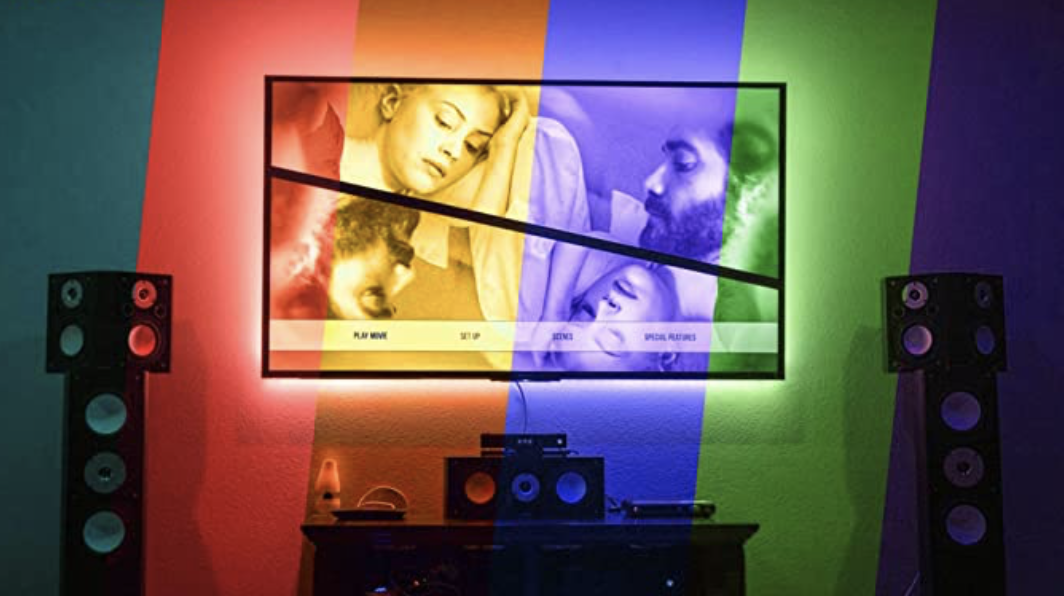 The Pangton Villa LED Strip Lights attached effortlessly and never lost their hold throughout our tests. They produce dim accent lighting, making them our pick for the finest TV LED light strips since they’re ideal for backlighting a TV. The remote control isn’t difficult to use, albeit it’s a bit of a guess as to what each button accomplishes. The light strips are divided into pieces with flexible connections so that they may be altered to suit a TV. During installation, we found this function to be really useful. 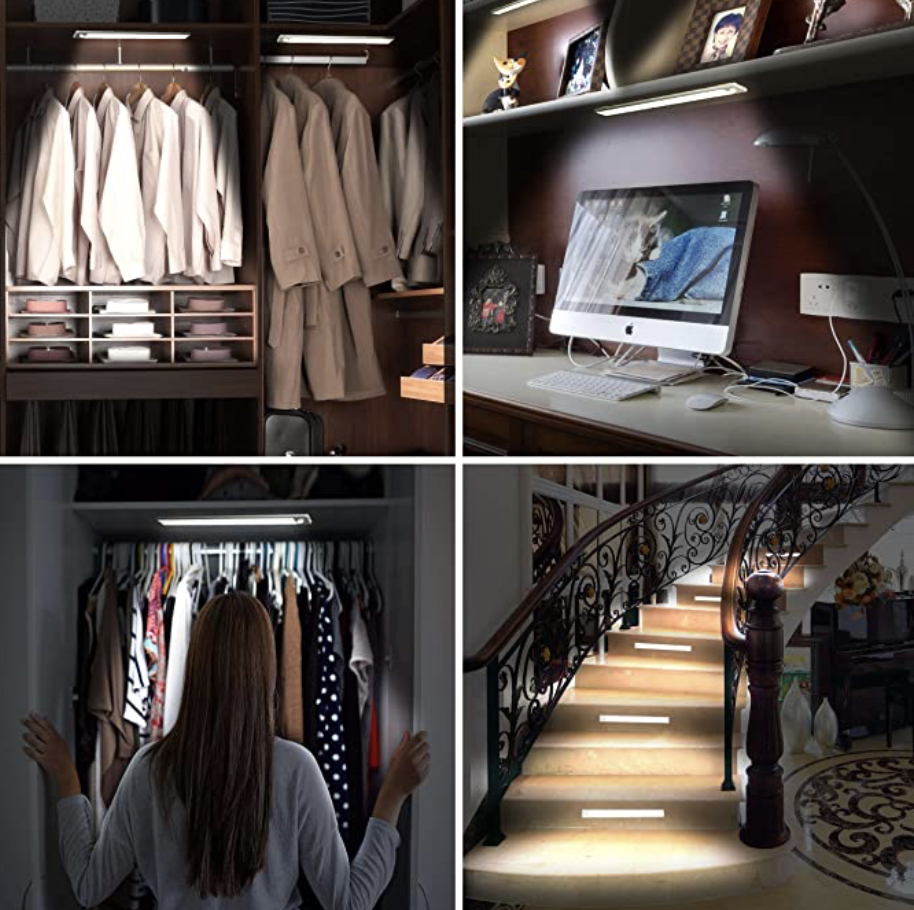 Unlike most other light strips, the Cotanic LED Motion Sensor Light Strip is not flexible. It offers a 10-foot region in which the motion sensor may detect movement and switch on the LED light strip automatically. The LED strip turns off after 18 seconds of inactivity within a 10-foot range. The high-density light strip may be connected or withdrawn from its magnetic attachment for simple recharging through a USB connection, removing the need for electrical cords.

The ultrathin shape is ideal for dark corridors or a flight of stairs, where it will give lights during the darkest hours while staying inconspicuous to feet. The glare-free diffusion plate makes it an excellent nighttime guide, preventing users from being dazzled when it activates automatically.

During our testing, this light proved to be a stumbling block. We put it through its paces in an office, connecting it to a hutch over a desk. The motion sensor did not operate for the first few days. It has three modes: on, off, and auto. It wouldn’t turn on when set to auto, no matter how much walking, flapping, or waving we did…until around 5 days into testing. Suddenly, the motion sensor began to operate, and it did so admirably for the following week.

Despite the sensor difficulties, the design of this light was one of our favorites. It is held together by adhesive-backed magnetic brackets. To charge the light, just remove it from the brackets, and it may adhere to any magnetic surface. We liked the strong light and would use it instead of a desk lamp to save space.

Yeelight LED Light Strip 1S produces high-quality, dependable light strips. As far as the best LED light strip is considered, Yeelight LED Light Strip 1S is chosen as our top selection because of how easy it is to manage, how quick it is to connect, the millions of colors available, and the overall quality. While the others on our list performed well, this is our favorite.